Tracie Dignan is Bowen Flexi Care’s most humble client.  Not one to boast, Tracie is very shy about her amazing swimming achievements.  Did you know that Tracie was an Australian swimming representative? Tracie was a member of the Australian Special Olympics in Dublin Ireland in 2003. 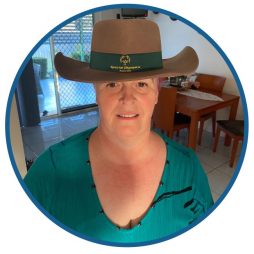 After many years of 8am training starts six days a week at the local YMCA where she had her own swimming lane, with Mum/Coach Marie by her side every step of the way, Tracie retired from competitive swimming in 2003 after reaching the top at the World Special Olympics and moving to Bowen from Bendigo Victoria where she was a known superstar in 2004.

A master of all four swimming strokes Tracie could, according to her supportive parents, swim before she could talk. At a young age Tracie was inspired by her neighbour who was a Special Olympic Swimmer to do the same.

Swimming has never been a race for Tracie. It was about the enjoyment and safe feeling being in the water gave her. Tracie still believes in the motto ‘Let me win, but if I cannot win, let me be brave in the attempt’. Overcoming shyness and performing in front of huge crowds was more of an achievement than winning. Tracie says that “trying hard gets the rewards”. It is this attitude that created the humble, active member of society Tracie is today.

For someone who claims to not have a competitive bone in their body she certainly projected a different image in the pool. Tracie has a dedicated memorabilia room at her parents’ home filled with certificates, medals, photos that highlight her brilliant swimming career and uniforms from all levels of representation – State, National and Olympic.

Tracie was nominated in the Australian of the Year Awards in 2004 and invited to further represent Australia at the World Master Games but declined the offer due to logistics and deciding instead to live life in a slower lane.

Today, Tracie enjoys a slower pace taking leisurely walks and swimming in a floating style in the warm tropical waters of Bowen. Tracie is grateful for the endless support, both professionally and personally, of her parents Ambrose and Marie, a driving force behind the confident person she is today.

With the upcoming Olympics in the spotlight, it may ignite Tracie to regrow her fins and represent Queensland this time. Go maroon! “Never say never” shrugs Tracie.

Interviewed and written by Tracie Cockburn